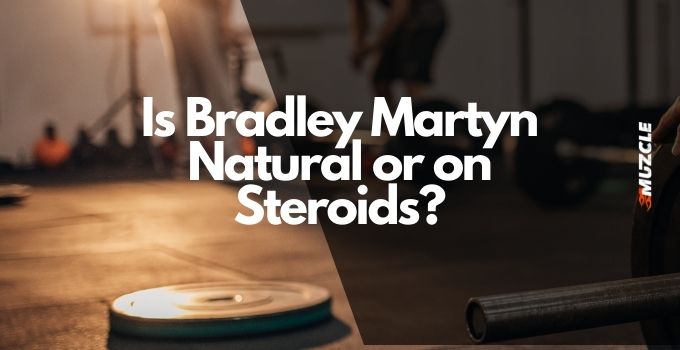 There are several bodybuilders and fitness enthusiasts online – showing off their colossal body and their massive gains either for show or to inspire people to do the same as them and take their very own journey towards self-improvement.

However, considering the amount of work necessary to create this image of “progress,” some people would often take the, erm, for the lack of a better word, the “shortcut” to achieve such an appealing image in no time. With the heavy stream of information that we receive every day through these platforms, it is not surprising to see some people get away with a cheat code while others persevere to achieve these gains in the most natural way possible.

To start off, let's put Bradley Martyn to the stand.

Bradley Martyn, standing at the height of 6 ft. 3 in. with a massive weight of 260 lbs. despite having a 7-8% body fat content, is just surreal in the sense that he could even be considered the epitome of the male species with such stats supporting his identity.

Sure, one could mimic the same characteristics with the right amount of work put into their body, but come on, let us not kid ourselves and let us just marvel at that achievement – one hell of an accomplishment if that is, in fact, utterly natural behind the scenes.

We know, let us not get ahead of ourselves by providing a conclusion without examining all the facts available to us. Let's get started with dissecting this issue then, shall we?

Bradley Martyn, a 6 ft. 3 in bodybuilder, averaging around 250 lbs. with a 7-8% body fat content, was born on the 22nd of May, 1989. According to some interviews and information available online, he started lifting weights when he was only around 15 or 16 years old – a feat on its own, for sure. This would bring his weight lifting career's “boom” at about 2005.

Bradley Martyn uses YouTube as his platform of choice to share his fitness journey. He lives in San Francisco, California, and he reportedly experienced a tragic incident at a young age where he lost his father, Michael G. Martin, to suicide. This happened when he was only six years old, but this event, instead of pulling him down, simply induced positivity and inspired him to be more confident and spend most of his days without any regrets.

This mesmerizing male specimen started going to the gym at around 15 or 16 years old. Following that, he began to learn several things about weight lifting and fitness – weight training, nutrition meals, all that there is to improve one's body and develop a robust and solid build.

Once his foundation was relatively decent enough, he participated in professional bodybuilding contests. In 2011, he competed in an NPC bodybuilding show as a 22-year old lifter with 5-6 years of training under his repertoire.

In 2006, he began his online fitness journey – later on founding the AlphaCre8tivedesigns in July of 2012, albeit these programs only received a moderate and lukewarm response from the public. While this program initially flopped, his social media presence boomed in the later years, allowing him to open his first fitness center, Zoo Culture Gym, in 2017.

On YouTube, on the one hand, he now has around 3M subscribers, with thousands of views on each of his videos that are comprised of vlogs, fitness challenges, workout routines, and various training videos.

As of early 2022, Bradley Martin has an estimated net worth of around $2 million, with his income mainly coming from the programs he established and his YouTube career that seems to be going relatively well. In his fitness center, Zoo Culture Gym, it is estimated that the costs may go as high as $1080 for a year's worth of sessions, while his top-selling products in his own line of vitamins could range from $42 to $44.95.

While both of these numbers may not seem like a lot to equate to his current net worth, it might be essential to remember that the public's response to his presence made this possible even at such price points.

Furthermore, he might earn around $16.4k to $263.1k annually from his main YouTube channel, $4.7k to $74.k annually from “Life of Bradley Martyn,” and more from his other related channels. If you'd ask us, that is a great recipe to achieve not only such a fantastic image and body but that humongous income as well.

Steroids, or, as some people who are particularly pedantic with the term would say, performance-enhancing drugs, are certain medications or drugs that are used mainly to promote a fitness enthusiast's, bodybuilder's, or even an athlete's muscle growth and develop commonly known male traits such as facial hair and deeper voice – with the former being the main priority of bodybuilders when consuming the medication.

Although this might seem appealing to many, one must note that it does have many risks that are associated with its use – some being as mild as having shrunken breasts, severe acne, and high blood pressure, while some were reaching severe adverse effects that may include infertility, shrunken testicles, and even heart problems in the long run.

Common Indicators of a Bodybuilder on Steroids

Now going back to the original question at hand, how do we know exactly if a person is, in fact, taking steroids to improve their body image. One direct answer is to ask them to be sure, but we all know that we will never have the liberty to simply walk up to a person with a particular image to maintain – especially ones with a reputation in the bodybuilding and fitness world – and ask whether they are taking steroids to boost their performance.

What do we do? We go back to the common facts.

For one, people taking steroids will look almost photoshopped due to the overstimulation of their muscle growth processes. Those who are particularly obsessed with developing themselves may not even notice that they are overdoing it. Next up, the shoulder and trapezius muscles would often look “3D” due to how they respond better to resistance training and steroids.

In short, you'll see some disproportionality between the upper body and waist. Some may even present with a swift mass gain that seems almost unnatural, along with well-defined paper-thin abs that are just there all year long – one process that is impossible to sustain due to the tremendous work that comes along with it.

While Bradley Martyn is definitely a specimen to behold with well-defined characteristics that almost seem to defy nature, one could inarguably point out that his build is just too unnatural to classify as normal or devoid of enhancements.

From his physique that could contest the lean muscle mass of Arnold Schwarzenegger to a disproportionate figure that could almost be categorized as asymmetrical, it simply highlights that everything almost seems too “perfect” that a flaw in the background is just glaring right at us. With the common indicators of steroid use almost pinging wildly at his figure, one could come to the same conclusion as ours with ease.

Verdict of the Evidence: Natural or Steroids?

Considering the facts that were presented, along with the characteristics of Bradley Martyn, it can be assumed that he, in fact, is using steroids to maintain his figure.