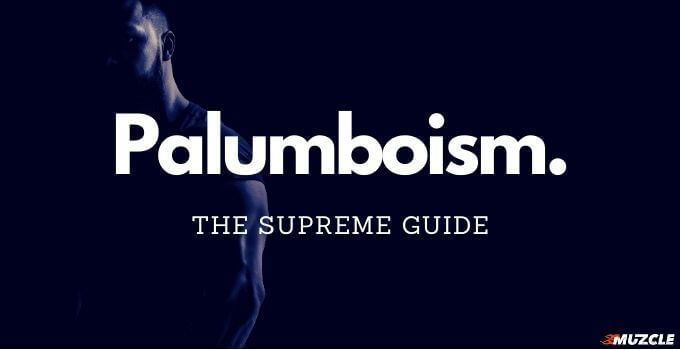 Known as roid (as in steroid) gut or hormone growth gut, Palumboism is a condition seen only in bodybuilders.

It is a condition in which a bodybuilder’s oblique muscles – the muscles beside the abdominal six-pack muscles – thicken to the point where it becomes difficult for the bodybuilder to hold the stomach.

However, not every bodybuilder suffers from Palumboism.

A visible sign is a stomach that grows disproportionately large to the chest. Although the abdomen remains as muscular as other parts of the body, it appears rounded and bloated in some cases.

The “six-pack” is still noticeable, but the muscles bulge out as if pushed from the inside by the intestines.

It appears unhealthy and ruins what is traditionally considered a beautiful V-shaped posture in a bodybuilding competition.

Origin of the Term

“Palumboism” was derived from Dave Palumbo (1), the first bodybuilder to observe the condition. Over time, it grew more common that in even professional competition, the condition seemed to be overlooked or ignored entirely and prompted Arnold Schwarzenegger to give harsh criticism.

According to Dr. Thomas O’Connor, the internal medicine physician at Metabolic Doc in Florida and Connecticut, Palumboism has not warranted medical studies because most cases are based on anecdotal evidence. There are not enough data to determine any noticeable pattern in all bodybuilders.

Known Cases of Bodybuilders with Palumboism

Some of the most well-known bodybuilders with Palumboism are as follows:

Another prominent sign of Palumboism is the apparent muscle wasting in the legs and arms. Perhaps due to its rarity and the fact that bodybuilders are reluctant to talk about it, nobody seems to be sure of the underlying problems until this point.

There have been some theories such as bodybuilder’s high-calorie diet and Human Growth Hormone abuse.

Thanks to the nature of HGH in regulating body composition and its efficiency in providing anabolic effects (2), long-term consumption of synthetic HGH can be the culprit.

The only observable risk factor is if someone is a bodybuilder. However, it must be noted that the act of bodybuilding alone – such as weight and strength training – should be ruled out from potential causes; otherwise, all bodybuilders would develop Palumboism.

Additional (sometimes excessive) consumption of performance-enhancing drugs makes a more convincing case for causing Palumboism. A typical set of muscle-building exercises is not enough for bodybuilders of professional level, so a lot of them turn to HGH and steroids to increase their training intensity.

Steroids have been used for decades by bodybuilders worldwide, but the incidences of Palumboism only became prevalent after HGH injections started to be widely practiced. Despite the stomach’s often-worrying look, Palumboism is not classified as a disease.

HGH – Potential Cause of Palumboism and Its Mechanisms

The pituitary gland naturally produces HGH. It is a vital hormone to ensure proper growth in children as well as adults. Synthetic HGH is often an active ingredient in many prescription drugs and other products sold freely via the Internet.

Such features, unfortunately, have led many professional bodybuilders and athletes alike to overuse the hormone (3).

Growth Hormone delivers a significant increase in a person’s ability to exercise and a small yet measurable improvement in isometric strength of the quadriceps muscles. Both are excellent advantages intended only for GH-deficient people (4). In fact, GH replacement therapy is encouraged for future trials.

Many patients have achieved a “near normal” quality of life, although there has been no evidence that such treatment can reduce mortality. Adverse effects are rare, and any claim is likely overstated due to excessive dosage during initial tests (5).

While the actual prevalence of GH abuse remains challenging to detect in professional sportspeople, the substance was banned in 1989 by the International Olympics Committee (3) and is also listed as one of the prohibited substances by the World Anti-Doping Agency (6).

The International Olympics Committee and Olympic Planning Committed do not consider bodybuilding a sport. The most disturbing reason that both committees refuse to include bodybuilding in the Olympics is that they think the athletes would fail to comply with the tournament’s drug policies.

Problem With HGH-Related Enlargement of Organs

Professional bodybuilders are highly unlikely GH-deficient people. HGH increases the size of not only the muscles but any organ that does not have a closed growth plate including hands, feet, face, liver, kidney, and intestinal lining. Therefore the use of synthetic HGH is possibly linked to Palumboism.

If that is the case, however, HGH use in bodybuilders should also enlarge more organs other than the intestines. This is why GH abuse should be regarded only as one potential cause among others. Insulin injection (to keep blood sugar under control despite the high-calorie diet) must also be considered.

Similar Yet Different Conditions to Palumboism

Disfigurement in extremities and face due to excessive production of GH is a condition known as Acromegaly. The condition is primarily diagnosed in adults, and it affects 1 in 250,000 people. Acromegaly shows similar symptoms of organ enlargement but not precisely the abdominal parts or intestines.

Some characteristics of Acromegaly may appear in athletes who are taking GH injections in higher doses than typically administered for therapeutic purposes. Fluid retention is a known long-term effect with prolonged use as well. In the Acromegaly case, patients suffer from muscle weakness (7).

Another condition that appears even more similar to Palumboism is Abdominal Distention. The visible sign is the same, although the latter can happen to anyone of any profession. It may also be a sign of psychological or social conditions (6) such as bulimia, somatization, and anorexia nervosa.

In a survey of healthy individuals and populations, about 10% – 30% experience Abdominal Distention. Despite the similarity in visible signs with Palumboism, Abdominal Distention has almost the exact opposite features, such as weak abdominal muscle and lack of exercise (9).

While the true mechanism of the process is less understood, it is believed that GH provides a combination of beneficial effects, including increased oxygen delivery to muscles, improved body composition, and more efficient thermoregulation. Muscles become stronger, and there are more fatty acids readily available.

Administering a supraphysiologic dose of GH to a healthy person reduces protein loss and improves cardiovascular function (10). For bodybuilders, the main benefit is increased lean mass. That being said, long-term use of a high dose of GH does not result in improved performance (11).

The main problem with the tendency to overuse GH injection is the misconception about muscle growth.

At least in adults, muscle growth is affected by activity-induced adaptation performed by local tissue level – as opposed to the systemic – mechanism. On the other hand, GH affects the entire system.

Skeletal muscle is flexible both in quality and quantity. They change to keep up with the demands of physical activity performed regularly. As muscles adapt to deliver the desired performance (and visual appearance for bodybuilders), they affect connective tissues simultaneously.

For example, an attempt to achieve hypotrophy requires the strengthening of fibroblast to ensure the proper delivery of forces, energy, and formation of new blood cells. In the absence of such coordination, enlargement of muscle cells will damage muscle structure instead (12).

Anabolic substances, including GH and IGF-I (insulin-like growth factor-I), are nonspecific agents. Because the human body is made up of organs and tissues that work in coordination, it is almost impossible to aim for the growth of certain muscle groups and expect minimum changes on the other.

The lack of understanding of this physiologic nature has led to many unsuccessful attempts to use anabolic agents for muscle augmentation and stimulation in a safe way. Two different studies also confirmed that the administration of GH did not considerably enhance performance in resistance training (13, 14).

Since skeletal muscle makes up about 40% of the entire body mass in humans, regulating its growth and development is of interest to bodybuilders. Unfortunately, evidence of the effects of supraphysiological GH in a healthy person is contradictive, and mechanisms of how it works are little understood at best (15).

Side Effects of HGH Abuse

Potential side effects of HGH use for people with GH deficiency may include numbness, edema, high cholesterol levels, tingling of the skin, pain sensation in muscles, joints, and nerves, and carpal tunnel syndrome. It may even increase the risk of diabetes.

There can be different side effects when GH is administered to healthy people. The correct models to look for potential side effects of a supraphysiologic dose of GH are patients with Acromegaly (3, 16), who secrete around 100 times more than GH necessary for normal growth.

Among the most common side effects are abnormalities of the cardiovascular system (17), impaired respiratory function (18), diabetes mellitus (19), and several other malignancies (20, 21). People with Acromegaly also have twice the mortality rates of the general population (22).

Taking supplements is a natural part of bodybuilding. While competitive bodybuilding has never really been a mainstream sport, it has every potential to promote greater, stronger physical and mental conditions.

Some even argue that supplements are necessary for the training regime; otherwise, bodybuilders will not reach the muscular build that the competition demands.

The workaround is to use only legally approved natural pharmaceutical-grade supplements from reputable brands and manufacturers such as CrazyBulk.

The brand offers 100% legal steroids as alternatives to HGH and other potentially dangerous drugs. All products contain natural ingredients with no side effects. CrazyBulk Supplements are orally taken.

Randy Smith is now also a professional trainer with an impressive track record spanning more than 30 years. Two of his most significant achievements were the winner of NABBA 1986, Mr. Britain, and runner-up of 1996, Mr. Universe.

Palumboism as a Result of Bodybuilders’ Dietary Habits

A diet that consists of high-calorie intake is suspected of having a direct correlation with cases of Palumboism. Most bodybuilders are trying to get rid of water contents in the body while taking a high amount of carbohydrates at the same time.

A limited amount of water in the body slows down the metabolism system, leading to severe food retention in the intestinal lining. Stretched abdominal muscles become part of the routine. Such a training regime enlarges those muscles to a great extent.

When GH abuse and an extreme amount of calorie intake are put together, Palumboism is an easy possibility.

This is not to say that Palumboism should be considered the norm in bodybuilding. Part of the sport is to figure out how to solve the bulging out of the abdominal muscle to create a proportionate posture.

Palumboism may not be classified as a disease (yet). Still, it raises serious concerns in the sport of bodybuilding, especially when the professionals involved at a competitive level ever want to make it a mainstream sport.

Consuming illegal drugs to manipulate muscle development is cheating in bodybuilding. On the other hand, taking legal supplements is safe and even encouraged in the sport that requires excellent physical performance.

Always pay attention to what you buy and consume as they can affect your body in many different negative ways. Palumboism seems to be a permanent condition.

In case you are in doubt about any dietary program or supplements:

There is no drug and supplements that can transform your muscles and postures magically overnight. They are nothing but tools to help you train harder and recover faster after every session.