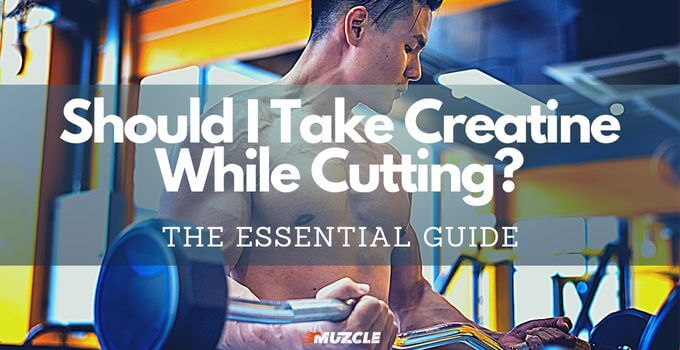 Creatine is a supplement most commonly used for weight gain, especially for muscle and strength. There’s a lot you might not know about creatine while cutting.

Many of these less publicized effects provide real advantages in other areas of your training and life.

Today we’re going to be discussing creatine and why it can help you lose weight more effectively, as well as how to use it to maximum effect.

Stick with us if you want to know if you should take creatine while cutting and make the most of what you’ve already built!

💲✂️ Deal: Crazy Nutrition currently offers 20% off its most popular plan! Take advantage of this offer now and save more on your Crazy Nutrition’s CRN-5 (creatine formula) subscription.

Creatine: What You Know

Every supplement company worth their salt has a creatine supplement – primarily because it’s a well-researched compound that actually helps build muscle and strength.

The benefits of creatine are actually well-known, and we’ve been using them to support the performance of athletes and bodybuilders for decades.

This is an ancient practical and theoretical history, so there’s no surprise creatine is considered an essential supplement by many.

There are also some common ideas about why you might not use creatine – especially for weight loss.

Ideas about water retention and looking “soft” are a concern among hyper-lean bodybuilders, while stories of hair loss and kidney damage abound.

Fortunately, the scientific benefits of any type of creatine are legitimate. The risks, however, tend to be the result of misrepresented science, poor understanding, or straight-up myths.

We’re going to cover these and why they’re both important for creatine’s relation to weight loss.

How It Works: Creatine’s Mechanisms

The way that creatine supplementation works is actually far more straightforward than most of the compounds in nutrition.

Your body uses creatine for energy at the cellular level, so having more of it is an excellent way to support energy levels, especially in the muscles.

While very few compounds are this simple, you just consume more creatine to support optimal levels (1) of muscular creatine and produce cellular change.

Supplementation is just about topping up your dietary creatine levels and providing your body with the best raw materials for performance.

Improving your cellular energy is essential – more so than at the whole-body level.

The point is to support the health of the internal components, as well as reduce cell health and provide mechanical energy in muscle cells.

The different types of cells do different things with the new, creatine-driven energy, which is why it’s got such a wide variety of benefits.

The role it plays in energy production also favors strength (2) and power at the muscular level because it is a high-energy, fast-release form of metabolic fuel. This allows you to replace the fuel (3) in the muscles rapidly.

Why Should I Take Creatine While Cutting?

Where does this all fit into your weight loss?

This is the big question for creatine – and it’s actually spread over a variety of benefits to your long-term weight loss process and end result.

#1 Performance: Intensity on a Cut/Deload Is Key to Supporting Muscle Mass

The performance benefits of creatine are central to the way that you experience your weight loss. They are going to adjust how you feel in the gym and what your performance looks like – important if you’re serious about strength.

This is important because your ability to support high-intensity training (4) during reduced training volume is critical.

If you drop your intensity too low during a deficit, you’re likely to lose strength which is already a risk during a calorie deficit.

Supporting intensity and your ability to perform repeated bouts, keeping strength and power high during a cut, is key to supporting muscle maintenance, strength, and growth.

#2 Muscle Growth Support on a Cut

It is entirely possible to see increased muscle mass and strength while losing body fat (5). The two are not opposite, and effectively-managed weight-loss diets allow for both at once.

There are a series of challenges to achieving simultaneous muscle growth and fat loss. Energy balance and supporting the signaling processes of the muscle cells are essential.

The energy deficiency seen with calorie restriction is a problem because it starves muscle cells of the energy that they need to support both regular action and recovery/growth processes.

The signal of being energy-deficient is a severe problem for muscle growth.

Fortunately, creatine stimulates the key pathways for muscular recovery and growth (7) during this weight-loss diet.

This is important because imbalance here can lead to serious muscle-wasting if left unchecked!

Supporting this process reduces your risk of catabolizing muscle (8), ensuring that you’re burning fat. This works best when combined with extra doses of leucine.

If you’re on a weight-loss diet, you’re going to struggle to get adequate levels of creatine-rich foods.

When you’re swapping out red meats for a leaner protein source, it’s easy to end up with a sub-optimal dietary creatine intake.

This means the possibility of deficiency – a legitimate nutritional problem, especially when it comes to hamstringing your performance!

Creatine supplementation is an effective countermeasure.

This is important because a deficiency can lead to poor performance, reduced muscle gains, and poor mental performance.

The energy benefits apply to overall health and wellbeing.

Improved metabolism in the endothelial cells improves the health of your circulatory system (9). This allows for greater pliability and a reduced risk of “clogged” or diseased arteries.

Creatine’s function at the cellular level also protects cells from energy-related death and has direct antioxidant effects. These support healthy aging and reduce the risk of adverse mutations/cancers.

#6 Metabolic Benefits of Creatine While Cutting: Reducing the Burden

There are benefits to creatine supplementation specifically – either because you don’t need to produce it internally or its knock-on effect on the metabolism.

Through these mechanisms, creatine protects your heart health significantly.

Creatine’s effects on heart health seem to stem from increased SAMe and reduced endogenous homocysteine levels (10), as well as the artery gains mentioned above.

Combined, these can lead to a healthier heart and a lower risk of chronic cardiovascular illness.

Supplementing creatine increases levels of S-Adenosylmethionine and trimethylglycine in the body.

It has a role – though we’re not sure precisely what – in combatting the build-up of plaque and “clogged” arteries.

The simple matter is that internally producing creatine carries a significant burden and stress (11) on your metabolism.

If you can reduce this burden and get your creatine from diet and supplementation, you’re reducing stress as well as gaining performance and energy benefits!

Individually, these are small changes. When combined – and considering the benefits to arterial flexibility discussed above – its clear creatine has some significant benefits to your heart health!

With all the popularity and common uses for creatine, it’s not surprising that some myths have built up around this supplement.

Fortunately, most of the bad press for this supplement misunderstands real science.

This leads to some scary claims, but, in reality, creatine is more like a vitamin than a shady, dangerous supplement.

The big claim is that creatine is a water retention risk.

This is a concern raised among serious physique athletes, so there’s a certain sense in which it’s already a very specialist. If you’re not a competitive bodybuilder, you probably never need to worry about this to start with.

However, even more importantly, the water weight you hold with creatine tends to occur through cell hydration and increased muscular fluid retention.

The retention of creatine and other fuels in the muscle increases your body weight but isn’t likely to make you look significantly different.

If they do, it’s purely by avoiding the “flatness” that comes with calorie restriction.

This is what happens when muscles seem deflated, and it’s a real concern when you’re restricting your food intake.

The second concern we’ve seen raised with creatine is that you’re going to lose your hair as a result of supplementation.

This is a strange one that comes from a single study whose results have never been verified with re-testing.

The problem is that there’s purely a theoretical link, and there’s not a significant body of evidence supporting these concerns.

They lack the literature – which is interesting since there’s such a wide array of studies on creatine.

The missing link is increasing a type of testosterone-based hormone called DHT.

Very few studies have shown DHT to increase with supplementation in a way that affects hair cells (13).

One possible explanation is that it’s an abnormal response or adjustments to prior creatine deficiency.

Overall, your hair should remain safe. There are mechanisms for creatine adjusting hair loss, but the sheer volume of studies that noted no significant changes suggests that you’re probably just fine!

One of the most annoying myths that persist around creatine is the idea that it’s going to damage your kidneys. This is absolutely not true for anyone who has healthy kidneys when they begin taking creatine.

The actual studies on this topic are entirely based on two problems with the science:

The obvious point is that healthy levels of creatine supplementation in healthy individuals – who are drinking enough water – are no problem (14). The scientific evidence doesn’t support any real fears about kidney health.

Once again, it’s clear that being careful with science is crucial for understanding creatine’s uses.

When we look at weight loss, there’s always a conflict between losing weight as quickly as possible and maintaining the maximal amount of muscle mass, strength, power, or whatever else.

A faster weight loss helps you hit your goals sooner, but it means that your result is going to compromise on other critical areas. These are meaningful to your performance – whether that’s as muscle mass or athletic skills.

The point of creatine as a weight-loss supplement is to support maximal performance while you lose weight.

It’s going to slow down any change on the scales, but with a superior result and maintaining performance, you’ll see significant benefits to a creatine-fuelled weight loss.

The benefits of creatine are well-rounded, supporting muscle mass and other vital areas of health during weight loss.

Providing your body with superior energy is essential to supporting the cells – the basis for every area of your performance and health.

Starting with the basics will always provide the best results – and getting optimal levels of creatine supports all the processes of muscle growth, maintenance, and performance that you want.

Creatine is so much more than a muscle-gain compound. Its virtues expand to health and make for one of the most effective, inexpensive weight loss supplements!